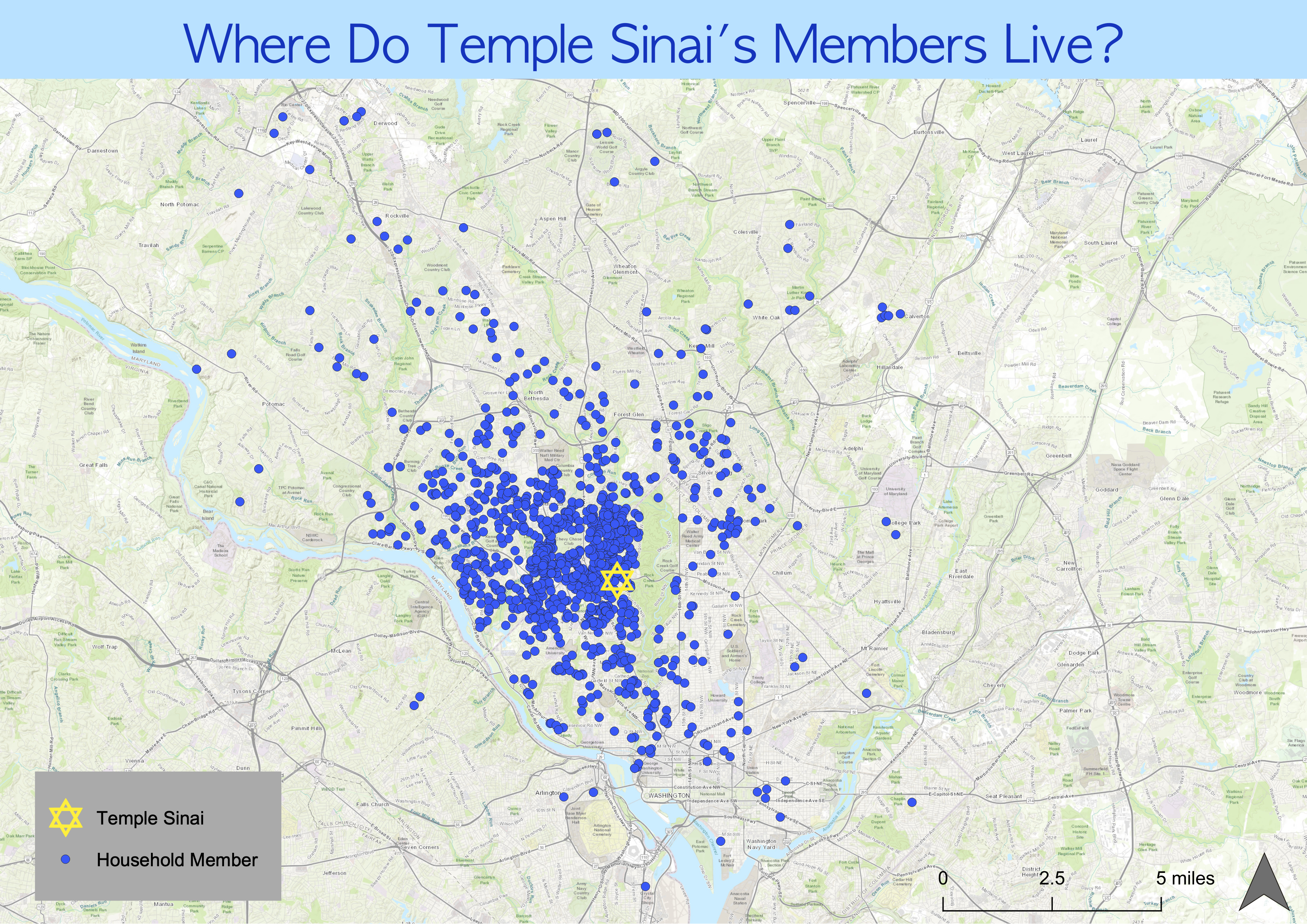 Temple Sinai originated with a group of seven families who, in 1950, began to meet unofficially at various locations. They sought a new interpretation of Reform Judaism, which they felt had become doctrinaire. In doing so, they endeavored to establish “a congregation of equals.”

After more than a year of these unofficial gatherings, these families adopted a name, Temple Sinai, and received a charter from the UAHC on April 1, 1951. The early days of Temple Sinai featured wandering from one meeting place to another – from the Dupont Circle Hotel to the Wardman Park Hotel to 16th Street at the First Congregational Church. However, the group gathered momentum, and it was joined by more worshippers, a cantor, and, finally, by its first rabbi, the newly-ordained Balfour Brickner.

In 1952, at the invitation of Dean Francis B. Sayre, Jr., the wanderers found a semi-permanent home in the Bethlehem Chapel of the National Cathedral, where they began to expand their activities. Committees and affiliates formed, and the religious school attracted increasing numbers of young parents. Innovative bar and bat mitzvah standards were developed, stressing no distinction between sexes. As the temple grew, its members began planning for a more permanent home. By 1953, the members took a first step toward permanence: the purchase of 3.18 acres at 31st Street and Military Road, Northwest, in the Chevy Chase DC neighborhood, for $47,750. 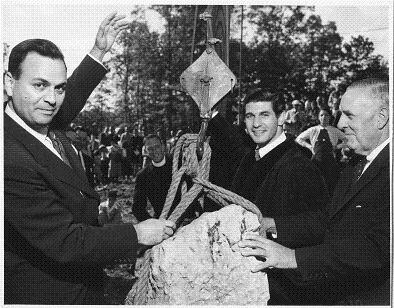 By this point, the temple had membership of over 700, a religious school larger than any in the metropolitan area, a newly formed Sisterhood, and a Brotherhood and Sinaites youth group. The cornerstone for Temple Sinai’s new home was laid in October 1957. The temple was designed to suggest a tent-like shelter in the wilderness, with walls of glass from floor to ceiling. As a stone taken from the Wall of Aggripa was put in place at the dedication ceremony, the congregation said in unison:

And this stone, which I have set up for a pillar, shall be God’s house. May the significance of this ancient stone, drawn from the past and now being set in the present, serve through its strength as an inspiration for the welfare of our common future.

Change came to the temple in July 1961, when Rabbi Brickner moved to New York to join the national staff of the UAHC and Rabbi Eugene Lipman was appointed as the new Rabbi. Rabbi Lipman stayed at the temple until his retirement in 1985. He maintained and expanded the founders’ aspirations for vibrant, continued learning; for community social concern; and for flexibility and openness to change. Fred N. Reiner, Senior Rabbi of Temple Sinai from 1985-2010, was elected by a congregation that recognized his commitment to the same ideals. Rabbi Mindy A. Portnoy joined our rabbinic staff in 1986 and retired in 2013. In 1994, Cantor Laura Croen became our first ordained cantor. Several other assistant and associate rabbis have served Sinai over the years. In 2010, Rabbi Reiner retired and become Rabbi Emeritus. That spring, Temple Sinai welcomed Rabbi Jonathan Roos as Senior Rabbi. His warmth and energy, his commitment to teaching and to learning, and his vocal, active support for social justice causes have been a wonderful fit for the temple.

In 1993, Temple Sinai completed a major renovation to its building, which made all areas of the building accessible to persons with disabilities, expanded the library, modernized student classrooms, improved office space and added the Bet Am, our small sanctuary.

Over the past twenty years, the temple has initiated innovative programs in education, ritual life and social action. In 1992, Temple Sinai congregants established Sinai Assisted Housing Foundation, a separate non-profit organization dedicated to helping formerly homeless families with children become stable and self-sufficient. Through the work of the Foundation, Temple Sinai congregants supported the establishment of Sinai House, a four-unit apartment facility for families seeking both transitional housing and social support. Today, the Temple Sinai community continues to be a primary support for the Foundation and the work of Sinai House. Temple Sinai’s kallah small group study and social program has developed into as many as twelve ongoing groups meeting monthly throughout the year. Adult education remains vibrant, offering new courses each year and attracting participants from the entire community. Over 150 adults have become a bar or bat mitzvah through our adult b’nei mitzvah program. Post bar and bat mitzvah young people are invited to attend adult education classes, read from the Torah on the anniversary of their bar or bat mitzvah, and serve with other active volunteers on temple committees.

In recent years, we have expanded our worship offerings to respond to a range of constituencies and worship styles, with regular Shabbat services on Friday evenings (plus a monthly “Tot Shabbat” and a monthly service aimed at families with children in K through 3rd grade), Torah study and Shabbat services every Saturday morning (including several alternative and lay led services), multiple services on the Days of Awe and services on each of the major festivals. Shortly after its publication, we adopted Mishkan T’filah as our siddur.

Today, Temple Sinai’s dynamic programs include several annual events: an adult Purim celebration in addition to intergenerational Purim Shpiel, creative service, and family carnival; a Sisterhood authors’ roundtable; a Cantor’s Concert that features our cantor, often in collaboration with other area cantors. We also offer an annual study programs with scholars-in-residence, guest speakers and teachers. With over 1,200 membership units, over 600 students in our supplementary religious school and nearly 130 in our nursery school, Sinai is a vibrant, spirited Jewish community rooted in tradition and looking joyfully toward the future.