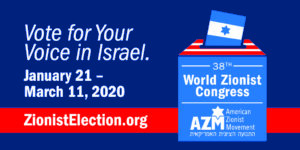 The World Zionist Congress is our only democratic opportunity to influence what happens in Israel and to support our Reform Movement in creating change in Israeli society. All voting will be online and accessible by mobile devices. ” To vote, on or after January 21st, go to ZionistElection.org and choose the Vote Reform slate. There will be a fee of $7.50 and any self-identified Jew who is over 18 is permitted to vote. The Congress will make key decisions regarding three institutions which allocate nearly $1 Billion annually: the Jewish Agency; the Jewish National Fund; and the World Zionist Organization.

The Israel Affairs Committee promotes temple engagement with and dialogue about Israel, and its programming reflects and respects diverse perspectives.