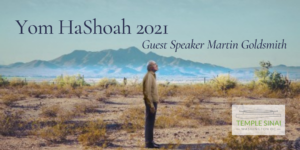 Join our clergy, adult and teen choirs along with string trio, Aaron, Sam and Harry Panner, in a service to remember those who died in the Shoah. Our featured speaker will be radio personality and author Martin Goldsmith who will speak about the newly released film Winter Journey.  The film is based on his well-reviewed book The Inextinguishable Symphony,  a moving memoir about his parents’ journey during the Holocaust. You do not need to have watched the film to join us for the service.

Goldsmith never knew what happened to his parents before they escaped from Germany in 1941. He tells the riveting and emotional tale of Günther Goldschmidt and Rosemarie Gumpert, two courageous Jewish musicians who struggled to perform under unimaginable circumstances. In the film Winter Journey Goldsmith and his father bring us back to the complex and confusing 1930s when his parents were young musicians.