As we celebrate Shabbat this week, we are honored to welcome Rev. William Lamar IV, pastor of Metropolitan African Methodist Episcopal Church in Washington, DC as our guest speaker about the legacy and inspiration of Dr. Martin Luther King, Jr. Rev. Lamar will reflect on the white supremacy that has given rise to the recent violence in our city. Read Rev. Lamar’s recent Opinion piece in the Washington Post here written after the Black Lives Matter sign in front of Metropolitan AME was destroyed. 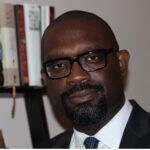 Prior to his two most recent appointments (in Maryland and the District of Columbia), Lamar was the managing director of Leadership Education at Duke University Divinity School in Durham, North Carolina. Through his association with Duke, he convened and resourced executive pastors of large churches, denominational finance executives, young denominational leaders, Methodist bishops, and the constituency of Lilly Endowment’s Sustaining Pastoral Excellence Program. For nearly 15 years, Lamar has been actively involved with organizations like Direct Action Research Training (DART), Industrial Areas Foundations (IAF), and Washington Interfaith Network (WIN) for faith-based community organizing for justice. Most recently, he has collaborated with Repairers of the Breach, the Center for Community Change (CCC), and People Improving Communities through Organization (PICO) to enact a social justice ministry in surrounding communities and to exhibit a real embrace the beloved community.

A 1996 magna cum laude graduate of Florida Agricultural and Mechanical University, Lamar earned the Bachelor of Science degree in Public Management with a minor in Philosophy and Religion and a certificate in Human Resource Management. In 1999, he earned the Master of Divinity degree from Duke University. Lamar is currently a doctoral student in the inaugural cohort of Christian Theological Seminary’s Ph.D. program in African-American Preaching and Sacred Rhetoric. An avid reader and writer, Lamar has published articles in outlets such as Christian Century, The Christian Recorder, Divinity Magazine, “FaithandLeadership.com,” The Anvil, “TheUndefeated.com,” and the “Huffington Post.” He has also been featured in The Washington Post and the Afro-American and on WNYC’s “The Takeaway,” NPR’s “1A,” the “Huffington Post Live,” and PBS’s “News Hour.”

Lamar is honored to serve Metropolitan African Methodist Episcopal Church, where he seeks daily to extend Metropolitan’s nearly two centuries-long legacy of bearing witness to and ushering into this world the reign of the living God. Under his leadership, Metropolitan remains committed to worship, liberation, and service.